Judge Dover (ret) has completed over 550 mediations since 2008. The vast majority of those cases involved complex Will and Trust disputes, Family Law matters, Home Owner Association cases, Real Estate and other Commercial Litigation, including professional business dissolutions. His very high success rate is predicated on both extensive training in mediating high conflict matters and personal qualities, including patience, sincerity, wit, wisdom and compassion.

Special Training in mediation with the Straus Institute for Dispute Resolution, Pepperdine School of Law, 2005; Appellate Mediation Training and Advanced Appellate Mediation Training in 2008, 2009 and 2011 respectively. Training with ADRNC in 2010 related to Family Disputes, and continuous reading of the literature related to building mediation skills all help Judge Dover to assist counsel in resolving the most difficult of disputes.

Judge Dover also has taught mediation skills to lawyers and lay mediators in Nevada County and been associated with trainings at the Third District Court of Appeal.

Judge Dover’s judicial experience included sitting on the Civil and Probate calendar between 2004 and 2007, during which time he was very successful as a settlement conference judge. Other experience includes:

Member, by appointment of Chief Justice Ron George, to Judicial Council of California – 1996 – 1999

Chair, California Judges Association Responding to Unwarranted Criticism Committee 2006; founder of above program and trainer of response teams 1993 to present

He is a member of Mediators Beyond Borders and the Association for Dispute Resolution of Northern California.

Outside interests include travel, golf, fly fishing, studying American Sign Language and Spanish, as well as reading, jogging and Latin dance. Judge Dover has been married to Lynne J. Dover for over 33 years and has a stepson, Shane Johnson. He has lived in Nevada County since 1981.

Please direct any questions you may have or requests for additional information, including references, to any of the numbers listed below. Thank you for your consideration and attention to this resume. 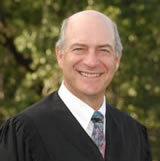 "Dover hails from the ...heart of the gold country - and many lawyers said he is, like his adopted hometown, the gold standard among mediators and their first choice to resolve disputes." - SF Daily Journal 12/12/14

"I have practiced in the area of trusts and estates and elder financial abuse litigation for the past 25 years. I have mediated a great number of cases over the years, and by far Judge Dover stands alone, head and shoulders above the rest." - Ed Corey, Esq., Shareholder, Weintraub Tobin, Sacramento

"He is a very judicious, wise man. At the same time, he is able to go brass tacks and calculate numbers and know the issues quickly." - John Sinclair, Esq., Sinclair Wilson Baldo & Chamberlain of Roseville

" His approach is, I think, to connect on a personal level...You need a good blend of business sense and old fashioned counselor, and he excels at both." - Maralee Nelder, Esq., Certified Family Law Specialist, Nevada County

"Judge Dover is smart, hard-working and personable. In my experience, as a mediator he will not give up until he either has a settlement or he is positive that all options have been fully explored." - Douglas Straus, Esq., Partner, Archer Norris in Walnut Creek

A word about "TESTIMONIALS":

These testimonials are meant to help you, the lawyers that do not know me , to have confidence that I have the kind of experience and disposition that would make me the right mediator for your case.

However, I would like to address the concern that, as a mediator, I might favor someone who has offered one of the testimonials below: DO NOT WORRY ! Read more